Describe yourself
I believe that ‘being yourself’ is the best thing anyone can be and I describe myself as totally me — optimistic, enthusiastic and happy. I am ‘Me’, always realising my weaknesses and improving on my strengths.

Favourite Miss Universe or Miss World
She did almost everything that was expected from her. Hence, Priyanka Chopra is my favourite Miss World. My another favourite is Diana Hayden as she is still actively participating in almost all social awareness programmes and has improved herself as a social activist. We also share same culture with these two Indian beauties and they are role models for South Asian women who almost share values and norms.

Personality that you resemble in terms of character
I resemble many personalities — Mother Teresa for her giving and caring nature, Barack Obama for his leadership quality and Mahatma Gandhi for his courage to challenge the British rule. Turning to our national heroes, I really can’t miss Anuradha Koirala and Pushpa Basnet for being ‘the’ women in male-centric society who are able to change attitudes of Nepali society towards women empowerment.

If I win the crown…
Our society desperately needs a role model and a capable social activist. So, after being crowned, I would like to be a responsible social activist. I would actively participate in every social affair which requires a role model. However, particularly I would like to raise voice against child labour. Being a woman I would fight against the stereotypical attitudes that our society has on the role of women. I want to be an example for every Nepali women and help them break the silence and raise their voice against gender inequality. 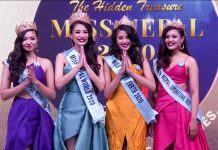 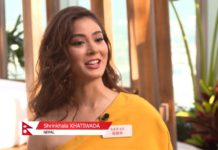 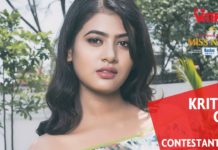